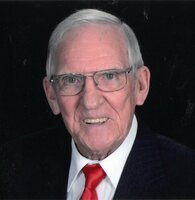 Harold Edward Deskins, age 89, of Buford, GA, formerly of Kingsport, TN, went to be with the Lord on Thursday, December 30, 2021, with his wife by his side, as she has been since they were high school sweethearts.

Harold was born to Wallace and Dora (Winters) Deskins on August 12, 1932 in Dante, VA. He was a 1950 graduate of Dante Central High School. In addition to his parents, Harold was preceded in death by his sister, Pearline Cook (Chester).

In 1994 Harold retired from Oakwood Markets as Vice President, after forty years of service. He was a member of Fellowship Free Will Baptist Church in Kingsport, Tennessee, but was attending Midfield Free Will Baptist Church at the time of his move to Buford. He was a lifetime member of Lynn Garden Optimist Club where he had served as president, and was a former member of the Tennessee Grocers Association. Harold was honest, hard-working, and respected by all who knew him, and much loved by his family.

Funeral services will be held on Saturday, January 8, 2022 at 11:00 A.M. at Carter-Trent Funeral Home, 520 Watauga St., Kingsport, TN with Rev. Bob Lewis officiating. A eulogy will be given by Wally Boyd and burial will follow at Oak Hill Cemetery.

The family requests that all attendees wear masks and practice social distancing during all activities.