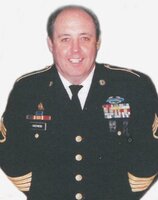 Mt Carmel – Rev. Edward Reed Shepherd, 75 of Mt Carmel, went to be with the Lord on Thursday, March10, 2022 at his residence. Born in Kingsport, he had been a resident of Mt Carmel since 2003. Edward was saved on March 17, 1973 and ordained as a minister in 1974.  He had pastored Moore’s Memorial Church and was assistant pastor at Forest View Church. He was currently a member of Way of Life Baptist Church where he preached, taught Sunday school and drove the church bus. Edward was a veteran of the U.S. Army having served in Vietnam 1968-1969 and Desert Storm 1990-1991. His rank was SFC and he received the Purple Heart, Bronze Star and many more medals. He retired from Kingsport Press in 2001.

A military graveside service will be held at 2 pm Wednesday, March 16, 2022 at Mtn Home National Cemetery with American Legion Hammond Post #3/265 conducting the rites. Pastor Johnny Gibson will also officiate. Family and friends will serve as pallbearers. Those wishing to attend are asked to meet at the cemetery at 1:45 pm.