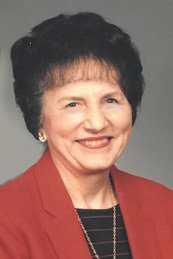 The birth of Virginia Lee Murray (later Allison) was imminent.  The wind was cold, and the snow was deep on March 2, 1927.  Virginia’s parents, Walter D. and Pearlie Hart Murray, waded snow up to their knees to reach his parents’ home in the Arcadia section of Kingsport, Tennessee to receive a midwife’s help in the delivery.  She was a beautiful first child and God was there in their midst smiling at His new creation knowing that for 92 years she would be His loving, faithful servant here on earth.  Virginia never failed – she loved, cared for, and continually encouraged others as she lived her servant life, always in reverent awe of Him.  Following hospitalization for a severe case of pneumonia, God called Virginia home on Wednesday, July 3, 2019 at 7:00 p.m.

Her life was an exciting, eventful one, always with an interest in learning and educating others.  Virginia spent many years guiding young lives as an educator and many years serving as a companion to her husband, Rev. Dr. William Landon Allison, as they ministered in various Church of God churches, headquartered in Anderson, Indiana.

Virginia graduated from Dobyns-Bennett High School in Kingsport, Tennessee in 1945; from Emory & Henry College, Emory, Virginia, in 1954, BA degree, with a major in Religious Education and a minor in Psychology and Education; and, from East Tennessee State University in Johnson City, Tennessee in 1975, with a master’s degree in Education (with an emphasis on Library Science).  In addition, Virginia ventured to New York City at the young age of 20 and attended and graduated from the Barbizon Studio of Fashion Modeling.  She celebrated her 21st birthday in New York City.  While attending modeling school she also worked for Address-Multigraph Corporation near the Empire State Building.

Prior to her teaching career, Virginia worked in Kingsport for Mason and Dixon and the Intermountain Telephone Company as a “Number Please” girl.

After graduation from Emory & Henry College, she began her teaching career as a weekday teacher of Religious Education in the public schools in the Harrisonburg, Virginia area.

In 1944, Virginia met the love of her life, William (Bill) Landon Allison at a rival football game between Dobyns-Bennett High School and Science Hill High School.  Bill was from Johnson City.  He was a sharp looking U.S. Army Air Force Lieutenant sitting on a bleacher behind her cheering for his team.  Soon, however, he was by her side enjoying her company more than the ballgame.  They married on July 27, 1957 at First Broad Street United Methodist Church in Kingsport, Virginia’s home church where she was a faithful choir member for many years.

Together, Virginia and Bill taught and served in various capacities in the Air Force Dependent Schools (DOD) in Bitburg, Germany, Bushy Park (London Area), England and Wiesbaden, Germany.  As a reserve Air Force Chaplain, Bill also served as an assistant to the Chaplain and as a fill-in Chaplain as needed.  Virginia was by his side assisting.

Returning to the United States in the spring of 1963, Virginia and Bill taught and served in the Kingsport City School System.  Virginia taught at Andrew Johnson, ending her career there as a Chapter 1 Program teacher.  She also taught Language Arts (7th & 8th grades) at John Sevier Middle School for many years and served one year as interim librarian.  Bill served Dobyns-Bennett as Assistant Principal for five years and as a Social Studies teacher for many years.  Many in Kingsport will remember Virginia and Bill as their teachers and mentors.

As minister and wife, Virginia and Bill served in various capacities in several area churches, to include pastoring the First Church of God in Bristol, Tennessee and assisting in the Tacoma Church of God in Johnson City, Tennessee (Bill’s home church).  Virginia often served as pianist.

Dr. Allison (Bill) passed away on February 5, 1991.  Virginia continued living her servant life, making her home a place of joy for all who visited.  Music, games, popsicles, picnics on the porch, reading, laughter – all were a part of Virginia’s home.  Her home was a patriotic home, with Virginia so proud to fly the American flag and to honor Bill’s association with the American Legion.

Virginia will be greatly missed by so many, but we know it was a joyous occasion when she reunited with Bill, our Mom and Dad, baby brother Roy, aunts and uncles and nephew, Mike, who she treated as her own son.  Virginia and Bill did not have children of their own, but she was beloved “Aunt Ginny” to all of the family.

A service to celebrate and honor the life of Virginia Murray Allison will be conducted on Friday, July 12, 2019 at 7:00 p.m. at First Broad Street United Methodist Church, 100 East Church Circle, Kingsport, Tennessee 37660 with Rev. Jack Edwards officiating.  The family will receive friends from 6:00 p.m. until 7:00 p.m. in the church parlor, prior to the service.  The interment will be held at 11:00 a.m. on Saturday, July 13, 2019 at Monte Vista Memorial Park, 1900 E. Oakland Ave., Johnson City, Tennessee 37601.  Family and friends will meet at the cemetery for the graveside service with Rev. Jack Edwards continuing to serve the family.

The family wishes to express special thanks to the owners of Brighter Days Private Adult Care Company, Marcella and Anthony Roberts, and their many caregivers who lovingly took care of Virginia these last few years of her life.  We also want to thank the staff at Elmcroft Assisted Living for their professional care for the almost two years she resided there.  Our thanks, too, to Paul Goad, Debbie Kelly and James McMurray who helped her for over 30 years while she was living in her home; to

Mr. Mike Stice and staff for their professional and caring legal advice and help for over 30 years; to

Dr. Robert Funke and his medical staff for their continual medical support to Virginia; to the Holston Valley Hospital staff in the ER, ICU and Hospice Care Unit for their care during Virginia’s final days; to Amedisys Hospice for being there with their expert hospice care, especially to Erika who enrolled Virginia so professionally and to Rachel who stood by her side and with the family as Virginia closed out her life here on earth, informing us of the medical happenings as they occurred – a true, caring nurse; and to First Broad Street United Methodist Church staff who visited her regularly in the hospital.

Carter-Trent Funeral Home is serving the Allison family under the professional guidance of Mr.

Terry Hurley.  Online condolences may be shared with the family on the Carter-Trent website at

To send flowers to the family or plant a tree in memory of Virginia Allison, please visit Tribute Store
Friday
12
July

Share Your Memory of
Virginia
Upload Your Memory View All Memories
Be the first to upload a memory!
Share A Memory
Send Flowers