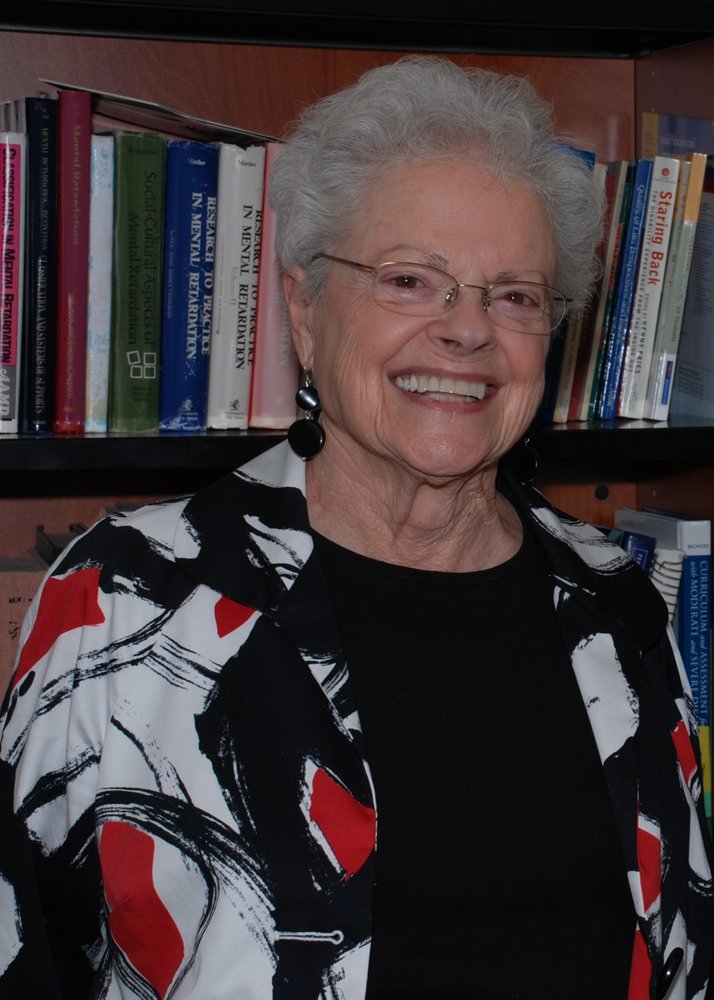 Jane was North Carolina born and bred. She studied Art Education in Greensboro, an endeavor interrupted—as for so many women of her generation—by World War II, marriage, and family. One of her four children, Billy, was born with Down Syndrome in 1956. At that time there were few opportunities for children like Billy, so Jane became a dedicated educator and passionate champion for all students, but particularly those with special needs.

While raising her children in Columbus, Georgia, she worked as a secretary for Ft. Benning schools, and as a “mature student” attended night classes in Elementary Education at Columbus College. She became a kindergarten teacher in Georgia, all the while commuting to Auburn University in Alabama where she earned her B.S. in Special Education and her M.Ed. In Psychology and Mental Retardation. Always a civil rights activist, she created and taught programs designed to integrate students with special needs. Because she wanted to pursue a doctorate and because Auburn University required its candidates to reside in state, Jane moved her family to Alabama and completed her Ed.D. in Special Education and Elementary Education in 1971 at the age of 47.

The family moved to Cullowhee, North Carolina, where she passionately embraced her career as Professor of Special Education. As she taught future and current educators, she co-authored several textbooks, notably the pioneering Mainstreaming Handicapped Students (1979, Turnbull, A.P. and Schulz, J.B.). This text would become foundational in the field of Special Education, providing techniques, ethics, and compelling scholarship to the understanding and appreciation of learners with special needs.

An innovative educator with international influence, Jane conducted countless workshops, engaged in the Council for Exceptional Children and other professional affiliations, coordinated Special Olympics events, and performed on the boards of Smoky Mountain Mental Health and Webster Enterprises even after retiring from WCU in 1989. Her distinguished service and teaching awards are numerous.

Jane’s public presentations, particularly with her son, captivated audiences worldwide and encouraged all of us to be the very best we could be. Jane's and Billy’s cheerful optimism and infectious humor made us laugh at times and cry at times, but always left us a little wiser, a little more inspired, and a whole lot more hopeful. Billy’s influence on his mother’s career is chronicled in her 2008 memoir, Grown Man Now. In December 2012, Western Carolina University conferred the degree of Doctor of Humane Letters, honoris causa, to Jane Bolton Schulz and posthumously upon William Robert “Billy” Schulz at the commencement ceremony.

Dr. Schulz was a warm, witty, kind, and generous teacher; she attracted a generation of students who thought of her as a second mother. During the 30 years following her retirement, people she mentored still sought her wise counsel and unconditional support. After moving to Kingsport in 2001, she continued to spread good will and seasoned wisdom in her beloved First Broad Street Methodist Church Bible Study, TeamMates, LiveWires, and her Legacy Writing Group.

Preceding her in death are her husband, William H. Schulz; her son, William Robert Schulz; and her grandsons, Stephen Paul Schulz and Robert Walker Geitner III.

The family expresses heartfelt thanks to Myra Watts, FNP, of Holston Medical Group,  and Suncrest Hospice for thorough and compassionate care.

A memorial service for Jane will be held at First Broad Street UMC of Kingsport on Saturday, November 2, at 10:30 a.m. with a reception following.

The Jane Schulz Scholarship Fund at Western Carolina University was created upon her retirement to assist and encourage late-entry students pursuing inclusive education degrees, following the trajectory of her own educational path. Contributions may be sent to The Jane Schulz Scholarship Fund / 401 Robinson Admin. Bldg. / WCU / Cullowhee, NC 28723 or online at http://give.wcu.edu/schulz.

To send flowers to the family or plant a tree in memory of Dr. Jane Schulz, please visit Tribute Store
Saturday
2
November

Share Your Memory of
Dr. Jane
Upload Your Memory View All Memories
Be the first to upload a memory!
Share A Memory
Send Flowers