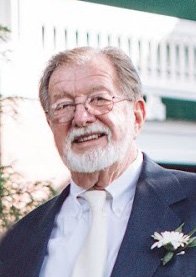 Donald F. Parker, 81, of Kingsport, TN went to be with his Lord and Savior Monday evening April 23, 2018 while surrounded by his family.

Don was born October 22, 1936 to the late Carson and Nealie (Ward) Parker in Hawkins County, TN. Don was a member of Cedar Grove Baptist Church. Don and his wife Linda were also members of the Goldwing Road Riders Association and rode from the late 70’s through the late 80’s.

In addition to his parents, Don is preceded in death by his wife Linda of fifty-four years; one brother, Darrell Parker; a very special friend, Brenda Marshall.

He is survived by his two children, Kimberly Hill Gregory and husband Wallace of Benton, Arkansas, and Jeffery Parker and wife Kim of Kingsport, TN; four grandchildren, Courtney Parker Robinson and husband Phillip, Kyle Blake Jones, Stephanie Hill Roberts and husband Clint, and Cody Alan Parker; two brothers, Jim Parker and wife Ann and Bill Parker and wife Evelyn all of Mt. Carmel, TN; two sisters, Edna Parker Boyd and husband James of Oliver Springs, TN and Glenda Parker Passmore and husband Joe of Clinton, TN; along with a host of other family and friends who will miss him greatly.

A visitation will be held 5 p.m. to 7 p.m. on  Friday April 27, 2018 at Carter-Trent Funeral Home, 520 Watauga Street, Kingsport.
A service will follow at 7 p.m. in the funeral home chapel with Pastor Hobbie McCreary officiating. Music will be provided by Clint Roberts and The Liberty Quartet.

A graveside service will be held 9 am Saturday April 28, 2018 at East Lawn Memorial Park.

To send flowers to the family or plant a tree in memory of Donald Parker, please visit Tribute Store