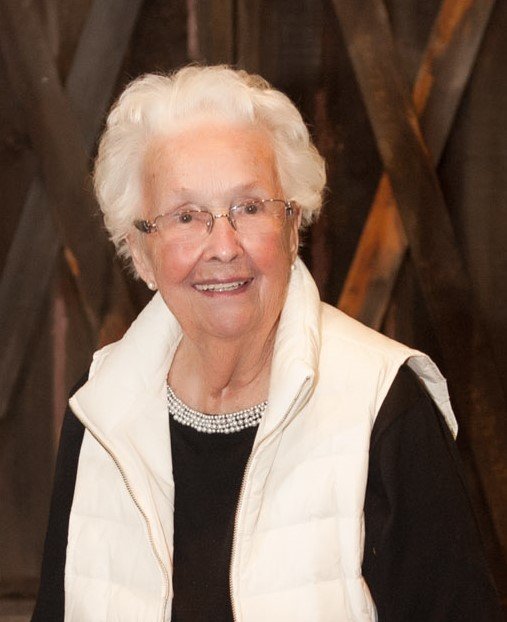 Betty was born in Knoxville, TN where she resided for most of her life.  She graduated from Knoxville High School, and also attended Salem Academy and the University of Tennessee, where she was a member of Alpha Omicron Pi. Betty attended West Hills Presbyterian Church, where she was a charter member.  She lived briefly in Middle Tennessee, and then returned to Knoxville to work at Southern Bell while her husband, Russ, served in the USAF in Korea.  While raising a family and supporting her husband in his growing business, Betty enjoyed an active social life which included a life-long passion for bridge (attaining Life Master status), UT sports, Cherokee Garden Club, Nine O’Clock Cotillion, and  bowling.  She became a widow in 1972 and continued to raise her children with a tenacity and determination that served her well.  While doing so, she also worked as a bookkeeper at Crenshaw Children’s Shop where she loved to interact with people.  Following her retirement she volunteered at East TN Children’s Hospital, which filled her with a tremendous sense of purpose and belonging.   In November 2016 she moved to Kingsport, TN to live near her two younger children.  She was an active participant in the Senior Adult program at First Baptist Church, Kingsport and continued to play bridge at the Kingsport Senior Center while also enjoying the activities at the Preston Place community where she resided.

The family will receive friends in Kingsport on Friday, May 11th, from 4:00-5:30 pm at First Baptist Church, Kingsport, with a brief service to follow officiated by Dr. Marvin Cameron.

A memorial service and receiving of friends will be held in Knoxville on Tuesday, May 29th at West Hills Presbyterian Church.  Details will be announced at a later time.

To send flowers to the family or plant a tree in memory of Elizabeth Emery, please visit Tribute Store
Print
Friday
11
May